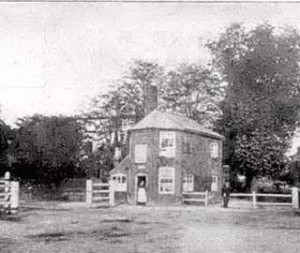 The Development of the Roads of Handsworth

Until the years of the Roman occupation of Britain. there was little means of communication in the country other than by horseback along the few country lanes and packhorse tracks.

The Romans constructed a network of military roads. the nearest to Handsworth being Ryknield Street which left the Fosse Way at Bourton-on-the-Water to approach the Midlands through Alcester and on to the great camp at Metchley, near the present Queen Elizabeth Hospital. From this point, it continued across Birmingham to Well Head lane to ford the River Tame at Holford near the present bridge at Perry Barr.
It then followed the line of Kingstanding Road and through Sutton Park to the Roman Camp at Wall on the Chester Road (Watling Street). The portion of the original road through Sutton Park is still preserved.

Most of the few original roads in Handsworth ran mainly north and south. Near the West Bromwich boundary. Halford Lane, from Smethwick. continues as Sandwell Lane (now Park Lane) borderIng the Sandwell Priory lands, later the estate of the Earls of Dartmouth. This lane led to Newton Lane, the highway from Wednesbury through West Bromwich. Great Barr, to Sutton Coldfield and the north. Crocketts Road led on to Sandwell Road, Queenshead Road to Rookery Road and Ninevah Road to Grove Lane, each joining Oxhill Road leading over the Uplands to Sandwell Lane.

The only through route from east to west, other than the track across Handsworth Heath from Birmingham to Wednesbury was via Aston Lane, Wood Lane, Church Lane and so to Oxhill Road.

During the sixteenth century, iron manufacturing developed along the Tame Valley. The lands of Sandwell Priory came into the hands of the Whorwood family in 1609, and they were probably responsible for converting the neighbouring cornmill within the bounds of West Bromwich into a forge. They were also engaged in Iron working at Perry Barr and at Wednesbury. Iron and coal would probably be conveyed from Wednesbury past the old West Bromwich Manor House (restored c1960), All Saint’s Church, along Newton Road, Hamstead Road across the spur of Tower Hill to Perry Barr.

In 1809, an act was passed to renovate the road from Hockley Brook to the Walsall Turnpike Road on the northern side of Hamstead Bridge. This road ran from Hockley Brook along Hunter’s Road, pact the Church of St. Mary and up Church Hill to Brown’s Green. from here it ran across the Park near Hamstead Hall to the old bridge over the River Tame. The present bridge was built further down the river in 1831. Here the road divided. one part to join Newton Road, the other, past Spout House Lane to Walsall Road. Spout House Lane so called from the spout or well from which water was conveyed in a wooden spout or covered trough to a group of cottages in one of which the famous preacher Francis Asbury was born. The cottages are now demolished.

With the rise of Birmingham as an important industrial town it was essential that easy contact be made with the coal pits of Staffordshire. The present main road through Handsworth and West Bromwich was for many centuries nothing more than a little frequented bridle path across the lonely Handsworth and West Bromwich Heaths to Sandwall Priory and on to Wednesbury.
In 1727, on account of the growing traffie in coal and iron, which, hitherto, had been carried in panniers slung across the backs of packhorses, a road was made and turnpiked from the point where the Hamstead Road left Soho Hill at the Roebuck Inn across the Heaths as far as Wednesbury.

A turnpike is a gate across a road to prevent the passage of vehicles and pedestrians until a toll is made. A turnpike road was one upon which such gates were established by law and which were kept in repair by the tolls made. Three turnpike roads were established in Handsworth: Holyhead Road in 1727, Hamstead Road to Walsall in 1787, the third through Birchfield not until 1831.

In 1810, the great road engineer, Thomas Telford, was charged with making an improved road from London to Holyhead following the Royal Mail route to assist the Irish members of Parliament, elected after the Act of Union. in travelling between Holyhead and Westminster.The building of this important highway at some distance from the area around the parish church of St. Mary in Handsworth, and from the West Bromwich centre around the parish church of All Saints an Newton Road. led to the development of trade and industry along the new road in addition to the expansion of the Soho factory and the Foundry. This development encouraged immigrants from all parts of the British Isles to settle in the Midlands, and this led to a tremendous development of house building in new roads and streets off the Holyhead Road.

Originally parish business had been carried on at the old Town Hall in Slack Lane but, with the new development away from the Town Hall area, it was necessary for new offices to be provided, so Parish Offices were erected in Baker Street in 1830 and served the Handsworth area until the opening of Handsworth Urban District Council House on Soho Road, on the site of the Waggon and Horses Inn in 1877.

Previously, the Holyhead Road had passed through Coventry and lichfield but at Stonebridge Telford diverted it through Birmingham, Handsworth to Shrewsbury to rejoin the Chester Road. No less than six Turnpike Acts dealt with this great highway. The last Act,iii 1832, is noteworthy on account of its allusion to gas and water mains along its route.

Among the turnpike Trustees appointed for Handsworth were Sir Joseph Scott of Great Barr Hall,Mr Wyrley Birch, Lord Lewisham of Sandwell Hall, Mr. Matthew Boulton, Mr Francis Eginton, Mr James Watt and a number of other local residents. The place of meeting specified in the Act for the Trusteegwas the house of Mary Birch, the Lamp Public House in the parish of Handsworth?

The building on the corner of Hamstead Road and Villa Road (known as Bendall’s Corner) is still marked “Toll Gate House” over the side doorway.

With the added development of the Jewellery Quarter in Hocklay, Handsworth soon became a pleasant and convenient residential district for the prosperous jewellery manufacturers. Many large houses were built on Soho Road and along Hamstead Road, all with coach houses for their carriages, their only form of transport from their homes to their businesses.

Between 1800 and 1900, many streets were developed in Hockley, Winson Green. and Handsworth providing for the building of hundreds of surburban homes for the workers needed by the new factories in the area.