Public transport services, which are taken so much for granted today, as part of the pattern of urban life, were unknown little more than a century ago. Regular long distance mail and passenger coaches were well established, but one travelled only if one must.

Handsworth was self-sufficient and was separated from Birmingham and West Bromwich by open country. However there was enough demand for Mr. W. Doughty to set up a horse-bus service in the summer of 1834 from the Beehive Inn near Handsworth to the White Horse, Steelhouse Lane, Birmingham. This was only 2 months after the first established service in Birmingham. 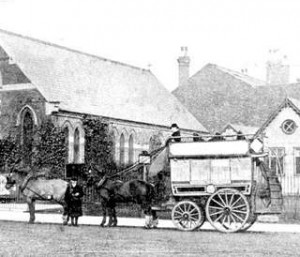 These early horse-bus services operated, between public houses as, being “short stage carriages” they were not allowed to stand on the streets.

In the 1850’s, William Mayner, both father and son, were running services in Handsworth and Lozells on the same routes in opposition to each other. These local services, operated by individuals apparently sufficed, and not until 1869 did the Birmingham Omnibus Co. appear with office and waiting-room at 53, High Street, serving Handsworth among other places.

A local event in 1872 was the opening of the tram route from Hockley Brook to West Bromwich and Dudley Port. This inaugurated by the Birmingham & District Tramways Co. Ltd., was extended into Birmingham in 1873.

Financially the tramway was not a success, probably due to the competition from the existing omnibuses, so that within four years a new company had taken over both services and W. Mayner became the manager. There was a line down Villa Road to Villa Cross with a depot in Lozells Road. Birmingham and the Black Country were later to see the largest network of narrow-gauge tramways in the country (3′ 6″ gauge), but the two original horse tramways were laid to the standard 4′ 8½” gauge. In Handsworth as in Birmingham. the local authority was the owner of the tracks and the Company a lessee operator.

In 1876 the tramway beyond the New Inns was abandoned owing to financial difficulties. Mechanical traction was developed during the 1880’s and steam tram routes were opened by the Birmingham Central Tramways Co. Ltd., including one to Perry Barr, from the Old Square, Birmingham. 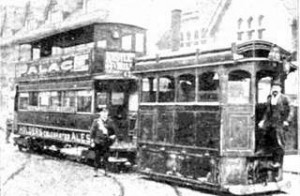 Birmingham at the New Inns, Handsworth. In 1885 it was decided to reconstruct the Handsworth tramway to the 316 gauge using cable traction rather than steam. A large winding depot was built in Whitmore Street, Hockley with two steam winding engines for the two cables, Hockley – Colmore Row, and Hockley – New Inns.
The cars, open-top vehicles on two four-wheel bogies with the drivers’ platforms un-canopied started running in 1888. The cars gripped the moving cable which ran in a slot between the running rails, and was controlled by means of a lever on the platform, the cable running at a speed of 9 m.p.h. Some single-deck bogie cars with open sides and cross-bench “toast-rack” seating were quite unsuited to the route and were transferred to the Kinver Light Railway. At the New Inns the cable trams connected with the South Staffordshire steam trams. (From “Handsworth Magazine” 1899, “Uniform 1d fare introduced on Cable Route. Colmore Row to New Inns for ld. service of one car every 11 minutes). 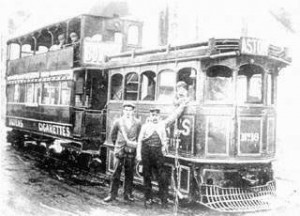 Tramway competition hit the independent horse-bus operators hard and during the closing years of the century, in spite of amalgamation, change of ownership and management, things did not improve.

The motor omnibus made its appearance on Hagley Road in 1903, and the responsible company soon needed more capital. The result was the formation of the Birmingham & Midland Motor Omnibus Co. Ltd., who acquired the motor vehicles, the horse-drawn buses referred to above and the Dudley Road company.

This new company despite the word ‘motor’ in its title, after three years trying to coax its unwilling motor omnibuses along Hagley Road and Harborne Road gave up, sold its vehicles and returned to horse-buses until 1912. Handsworth, therefore did not see the motor-bus until shortly before the 1914 War.

However in 1904, Handsworth had its own little war with the South Staffordshire Tramways Co. which had begun electric traction on the overhead wire system as early as 1893. By 1902, this company had electrified its route through West Bromwich to the New Inns, the portion between “The Woodman” at the West Bromwich boundary and the New Inns being in Handsworth. A dispute arose between the Company and Handsworth Urban District Council, whose engineer was directed to get steam up and place the Council steam-roller across the tram tracks at the boundary with West Bromwich. Eventually peace ensued and the South Staffordshire electric trams continued to the New Inns, connecting with the City of Birmingham Tramway Company’s cable cars to Colmore Row.

The latter cars were reaching the end of their useful life, the Company’s lease was running out, and Handsworth was about to be incorporated into Birmingham, so electrification of the route was begun. Birmingham Corporation electric trams, on behalf of Handsworth U.D.C., began to run over the former cable tramway on 1st July 1911 the route being extended to West Bromwich where the South Staffordshire cars terminated. As Handsworth was not yet officially part of Birmingham, the traction poles on Soho Road and Holyhead Road accordingly bore the Staffordshire knot with the initials H.U.D.C., as did those along Birchfield Road.

The opening of the Oxhill Road branch in 1912, and the Lozells circular services via Villa Road and Hamstead Road a month earlier, were further developments. The last tramway extension in Handsworth was from Villa Cross to the top of Villa Road in 1913 but no junction was ever made with the Soho Road tracks there.

The Birmingham & Midland Omnibus Co. Ltd. began operation again in 1912 with Tilling-Stevens petrol-electric motor buses, this time with success, and one of their routes was from the Ivy Bush Hotel on Hagley Road to Handsworth Wood via Hockley. In 1914 Birmingham Corporation took over all the routes within the city boundary. In 1924 there were through services from Colmore Row through West Bromwich to Dudley and Wednesbury.

In 1926 the complete Outer Circle (No.11) service was started, the route through Handsworth being as it is today.

April 1939 saw the end of the main Handsworth trams when omnibuses took over at Hockley depot. The Perry Barr route No.6 lasted ten years longer served to the end by the famous “Aston Bogies”, six of which had survived an air-raid in 1941 when Miller Street depot suffered damage. These were the original cars of 1904, at first open-top, but rebuilt with top covers and otherwise brought up-to-date. The Villa Road service No.5. lasted until 1950.

Apart from the General Strike of 1926, the only interruption to the tramway service in Handsworth were the overturning of a South Staffordshire car in Holyhead Road below the New Inns In 1922, and gale damage in 1928 when the temporary roof was blown off the Grammar School extension in Grove Lane and brought down the overhead wires.