During the second half of the 18th century, there was much development of both the canal network and stagecoach sytems of transport, but with the discovery of steam power came the railways. 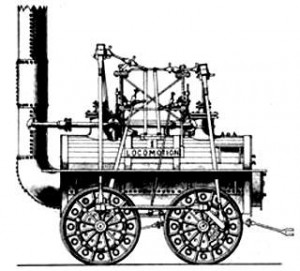 Thirteen years later, in 1838, the Birmingham Rail Company ran, the first through passenger train from the newly-built Birmingham railway station at Curzon Street to a similar station in Euston Square,London. Robert Stevenson, son of George Stevenson, had been appointed by the Company to design the railway which, when completed, was one of the greatest engineering achievements of that time.
The unique entrance to the Euston Station is now demolished, but the imposing Victorian frontage of the Birmingham Curzon Street has recently been restoration and preservation work.

By 1840, further relief was given to the Holyhead Road by the construction of lines by the Great Western and by the London & North Western Railway Companies. Both lines ran parallel to the roads and canals from Birmingham through Soho, Winson Green, Handsworth, and West Bromwich to Wolverhampton and to the north and also a line to Dudley and Stourbridge. 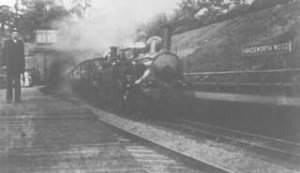 In April 1889 a line from Vauxhall through Soho Road, to Handsworth Wood and Perry Barr was opened.
This line was discontinued in 1941 and the Handsworth Wood Station was closed.

Looking down on the railway from opposite the “Endwood Public House” the traces of the old station can be easily seen. The photo is of a train passing through the station before its closure.